No I'm not referring to my son and grandaughter who have just returned to the UK with this title, but the fact that we have seen more amazing animals while they were here! On a trip to Hwange National park, we saw all the usual animals plus a pride of lions with quite young cubs who had made a kill of an elephant just by the waterhole. Jessica loves animals and really enjoyed spotting them with her binoculars. I was so proud of her as she is only nine, and to leave her Mum and brother behind was quite brave of her. It was lovely for me, though as I sometimes became Mum substitute having to 'do' hair and give snuggles as required!

We also took them to Vic Falls which was a first for us as well. The falls were awesome and we were not disappointed! We also got very wet even though they are not in full flood at this time of year. It was great fun, though. It sounds as if we are one long holiday but believe me it was a welcome 3 day break in a very busy lifestyle, especially for Dave.
The house we are building on the site for Taurai is well under way now and Dave is employing ten or so men now..
They are using a self-build method called Finn builder, so they are all learning new skills at the same time. One of the most skilled guys is an ex- prisoner and has been lent to us by 'Second Chance' a charity that helps to ease ex- prisoners back into society. The building has been hampered by lack of water. Although we now have municipal water at the site,( the well pump broke several weeks ago) we are experiencing major water cuts as the dams are so low after 3 years of little rain. Here at home we don't have water for 4 days a week but in the rural areas the situation is worse and people are being driven to break into pipes, so there is a lot of water still being wasted! 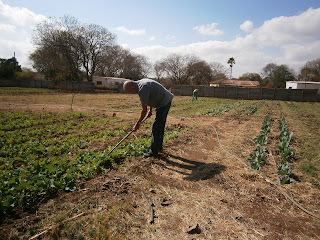 Here is Dave hoeing at lewis' plot. We took Gary and Jess there to help plant some beans. The rape crop is almost ready to harvest but unfortunately we lost some beans and butternut in the last frost earlier this month.                                              Lastly, we have a new addition to the Dean household. No I have not miraculously produced offspring! After having the motor of the electric gate stolen one night while asleep in our bed, we thought a dog would be a good idea. So we went to the local SPCA and here she is...(but please don't tell Toffee. She is purely for security!). Her name is Izzy and she has settled in sooooo well 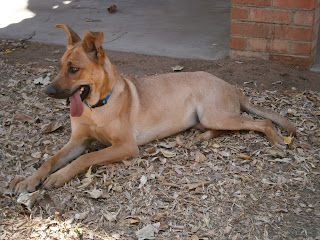 Sadly Google the cat had to put to sleep the day Gary arrived. He had always had a funny walk and we suspected that he was gay, but his walking deteriorated and while we were in bed with flu (another story) he hid away and was obviously not good. I took him to the vet and he suspected a brain tumour or similar that was affecting his nervous system, poor Google, he was such an affectionate cat! But also a real scaredy cat, afraid of everything. Hopefully Izzy is not!! That's all the news for now, but please send comments. we love to hear from you with your news too.