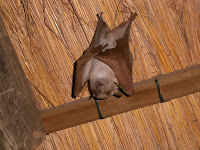 Definitely better weather here than in the UK! Though the children (and teachers) who have been off school probably won't agree... The children here are back in full swing at school, although many of them have not been able to go as they can't afford the uniform, or the books, or the school fees and levies. I asked a lad who approached me as to whether I had any writing books at home, how many he needed to take to his new secondary school and he said 32!! He is desperate to go but his Gogo (grandmother) who looks after him can't afford the uniform or books that he needs.  His mum has gone to South Africa, a common story here. He is just one of many!!

E is for exciting news.. Hopefully the new Early Childhood Development centre will open next week. We have been busy visiting the families in the shacks that live nearest to the church building and collecting names of 4 year olds. We have a planning meeting next Monday and then its all systems go!! The school will be open Tuesdays, Wednesdays and Thursdays in the mornings during term times. So that's retirement out of the window then!!

More exciting news is that the first of the houses at St Peters has been completed and the occupants are a man of 93 and his wife. The first house they have ever owned! We were there at church where Dave was preaching a few weeks ago and were amazed to find 33 children in the Sunday School too.

Following a few heavy downpours the vegetables in Lewis plot are looking very well. (Many thanks for the prayers for rain but keep going as we still need more!) and Dave is beginning to supply the new supermarket near us regularly. It is called Food Lovers Market which is very Dave don't you think?
The 1BD plot is also progressing, though not ready to harvest yet. It has caused quite a stir in the community and they keep talking about what the white man is doing. Not exactly what we want!! F is for Fence thieves too! X arrived at the site one morning to find that the top two strands of barbed wire running the entire length of the site had been stolen. $200 dollars worth! The new wire has been daubed with paint and is now connected to the second strand. You learn from such mistakes!
F is for Finishing.. I have written this over a two day period as I keep getting interrupted, so I just wanted to add that this morning we were up at 4.30 to go to help pick beans at Lewis'. We picked 80 kg (that's176lbs, for the oldies who still work in old money) with the help of X and 3 others. The word that comes to mind is FOOL and now I'm Flipping stiff!
It is very satisfying, though and Lewis can't believe that he is now a producer of top quality vegetables. Now I'm falling asleep so until next time.....ZZZZZZZZZZZZZzzzzzzzzzzz