Two for the price of one (letters that is)

As usual this blog is later than I had hoped! Unfortunately I am unable to offer any valid excuses and have unlimited admiration for the Whitby's who manage unerringly to write every day of their life in Astania!Also,  Unlike  them,  we are now counting down rather than up and are now in the 70s. (days that is until we come home). Like them, however we can understand many of their frustrations and difficulties in living in a completely different country and culture but, hopefully we have learnt a lot over the past two and a half years!
﻿﻿﻿﻿﻿﻿﻿﻿﻿﻿﻿
The churches here are doing well and we had an utterly amazing time at Easter when all three congregations came together for a "camp" at 1BD. The church vehicle really came into its own, valiantly driven by Diva, transporting people from Mazwi and Hamara. On the Saturday morning Mike and Taurai both preached amazingly,unlocking the real meaning of the cross. The catering team then did a great job by feeding 250 people with a veritable feast of sausages, rice and veggies all cooked over a fire! In the afternoon there were games for all the family. Talent  unfolded in a variety of races and games. Several people were upended in the sack races and good manners vanished when each congregation was challenged to undertake "chair ball"!! Its untrue to  say it was vicious, but very few survived...Ugly indeed!
The last session of the day was led by Dave and it was a powerful time of the Holy Spirit meeting people and setting them free.
﻿
The day ended with supper and a film for those sleeping at the building. We had three girls with their babies and two men from Mazwi staying with us. Two spoke very good English and we had a great time getting to know them. The three girls insisted on sharing a room with their children. There is only one double bed in the room so we are not sure how they managed but they are used to sharing and there was  an unprecedented amount of giggling going on. Especially when they tried the shower!(the first time for two of them!) They said it was like hot rain but didn't ask for an umbrella!
On Easter Sunday Taps preached and again it was a great time with our versatile worship team doing a great job.  The whole weekend served as a valuable occasion to establish a deeper sense of  unity amongst the three congregations and  was a great opportunity for people to serve.

﻿
May 1st is Workers Day and a public holiday in Zim, so we felt it appropriate to ask all of Dave's workers and their families to our house for a braai.Obviously the men are well known to us but we had never met one or two of the wives. They felt very uneasy at first but soon relaxed and started to have fun. A guitar appeared and the men were urged (they didn't take much urging) to entertain us with some singing. The variety of dancing (especially from Dave) was unusual to say the least!


﻿Then it was the ladies turn..Shyness vanished as we outdid them with our moves!! I'm fairly sure that both of these days will rank amongst some of the most unforgettable of our time in Zim. 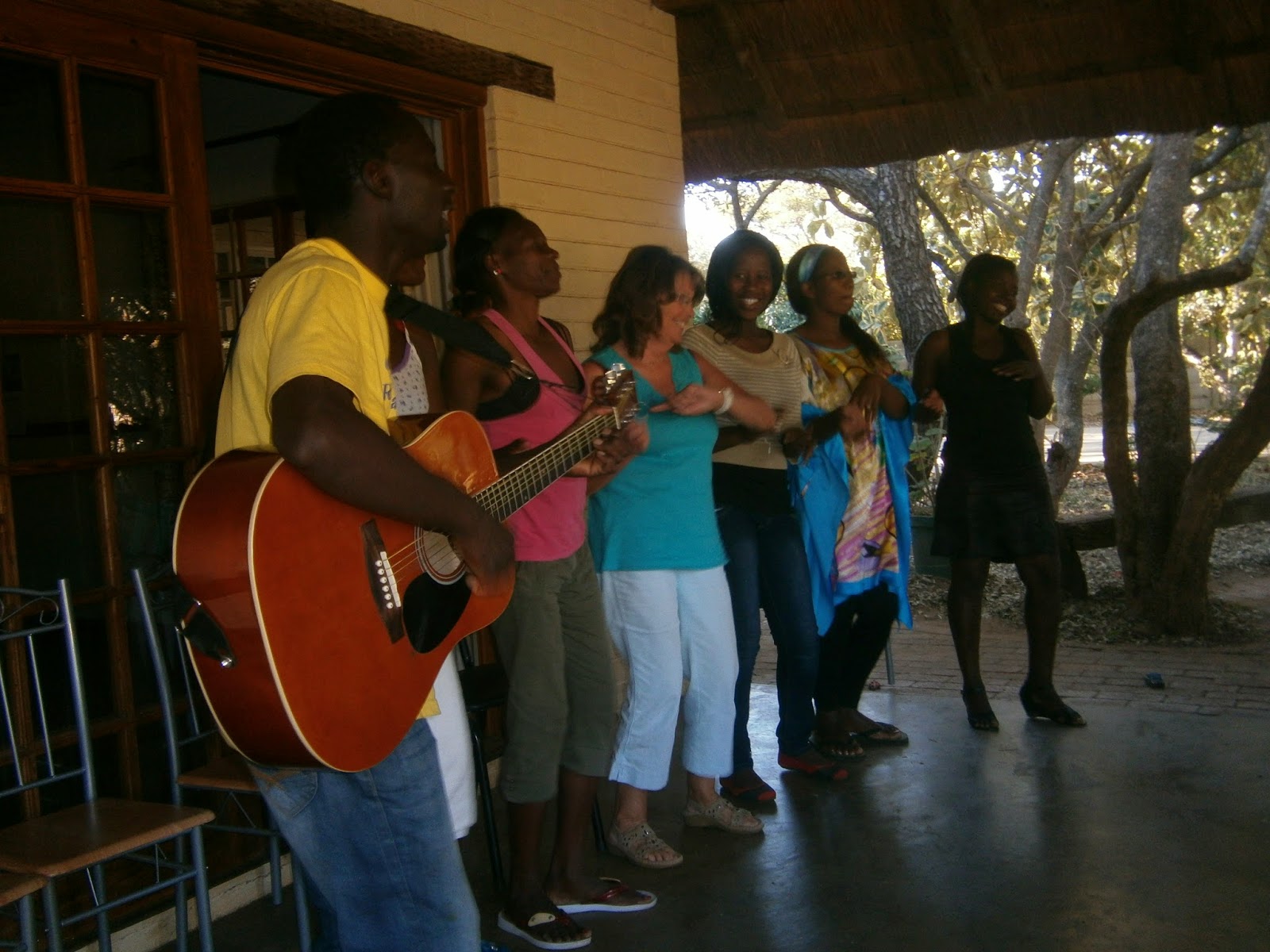