Having received a complaint about the regularity of the blog (or lack of it) from, I won't say who, but their name begins with G! here we go with an update... The weather is cooling down significantly and, I must say, the locals talk about the weather even more than the English, and thats saying something!
The water and Zesa saga continues without much encouragement and a great deal of diesel being used in riding around. In order for the water to be connected we have to buy all the pipes, connectors, taps and even the water meter ourselves! We are now expert in finding plumbing equipment in Bulawayo, if anyone out there is interested.

I'm sorry to say even after all this time, Dave still can't find his way around the city without me acting like a sat. nav. "At the next robots (traffic lights) turn right" .."Oh by the way the robots are dead because there is no zesa!" "Mind that bike on the wrong side of the road" "STOP that combi is reversing out" And so it goes on.... I haven't even attempted to drive in town yet! It is very scary. I think most people bribed their licences and never did any driving lessons at all, not in a car anyway. Maybe a donkey cart.

Sundays have been very encouraging lately as Taps has been preaching on the Gifts of the Sprit and opening up for questions from the congregation. People are gradually growing in confidence in asking their questions and it is a good measure of what they are understanding. Last Sunday a whole group of young people went forward to be filled with the spirit. Taps also had a word of knowledge that there was someone there who woke up that morning and had no food to eat and was only able to have a cup of tea. Would they come forward to be prayed for as he also talked about miracles. Nine ladies responded to the word and were prayed for. It was very moving as with their husbands and children, that is a lot of hungry people. It is heartbreaking to see how some people live such a hand to mouth existence and yet they still trust in God to provide. Very humbling..

We are off to Harare on Thursday for a leaders conference with Steve Tibbett. well, actually Dave is and I'm going for the ride! We are staying with a couple we hardly know but she runs a school there, so hopefully it will be educational!!

Sorry no photos this time as I'm doing this in a rush to please, you know who!!
Posted by Dave and June in Zim at 07:48 No comments:

Lord give us power!

Well doesn't time fly when all you do is chase from one office to another trying to get electricity (fondly known as Zesa) and water (generally known as water) connected to the church building, ready for our first conference in 4 weeks time! It is proving to be a bit of a marathon...But we are still running, just about...Despite all this the church is beginning to grow. Dave is counting each Sunday (eat your heart out Chris Ashurst) and last week he recorded 66 adults and 48 kids. In addition to this we had our first youth group meeting on Saturday. No Dave and I are not running it! A couple of people from Family Impact are working with them initially and then some of our own guys will take over, with support. Here they are playing volleyball (without a net). The church are very encouraged. 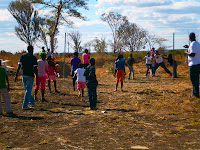 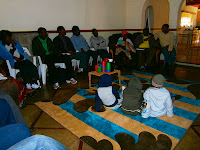 On Saturday we also had some life group leaders training here at the house. They came from Thembalezizwe and Hamara church so we had 28 here in all, including babies at breast (if you know what I mean!) and children. It was a great time as Renee Cunningham came to talk about how to use the Chronological Bible Storying method of teaching people about the Bible. It was devised by Sam Poe and is very effective in an oral society. 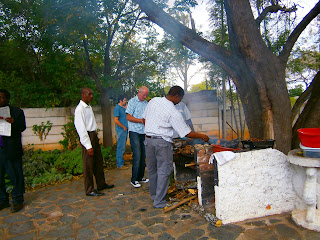 After church on Sunday Taps and Flora bravely hosted a b.b.q. for the whole church. There were at least 80 there and was a lovely treat for many of the members as they live in very poor conditions and are officially classed as squatters. 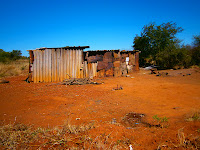 A charity called World Vision are in the process of building new houses for them on the west side of the city but only some have been chosen for re-housing so there are many who are desperately upset at being left behind. 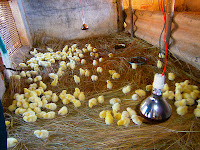 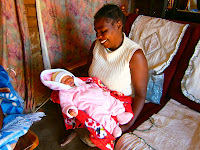 Anna is one of the people being re-homed. She has just had a new baby, her 9th! He is called William and has 6 brothers all with names beginning with W-- Wayne, Wonderman, Welshman to name but a few!! 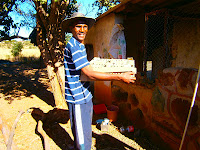 This is Edmund, our first outgrower. He has been out of work for a while so we have set up in business with him to raise 200 chicken. They are 2 weeks old now and doing very well. They will be ready to slaughter at 6 weeks. If they do well and we make a profit he can start to pay us back a bit at a time. That is the plan anyway. We saw some being slaughtered by the ladies today. They waste nothing. The ladies take the gizzards, heads and feet for payment as they love these. YUK!!!
We have another all night prayer meeting on Friday but this time its at our church building. Taps has been teaching on the gifts of the Spirit so we are praying for more power, but not Zesa this time!

Paint the town orange and brown! 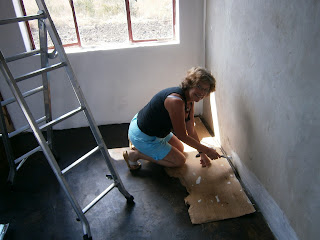 As things move soooo slowly here, we decided to do something really practical and paint the inside of the church building (affectionately known as 1 BD) hoping that we would feel better as we saw some results for hard work. It turns out to be a bit like painting the Forth Bridge as the walls are very rough and need 3 coats! And you can guess why I get all the low bits to do can't you? Anyway it is already looking alot better and we hope that the water and electricity will be connected soon. 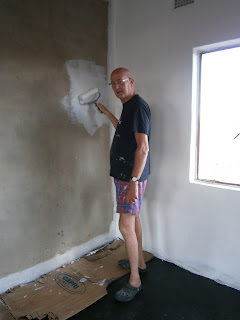 Dolly, one of the church members, is a health and safety inspector and has been handling the clearance of the building for use, so she has the contacts for the other things to be sorted. Unfortunately she has been very busy planning her wedding which took place on Saturday. The wedding was an amazing experience for us. Firstly, the person driving the bride to the school where the wedding was to be held, dropped out, so Dave was asked to step in. He was very pleased to do this as he is not a fan of weddings!! All the waiting around and trying to be polite to people just isn't his thing. He also wasn't prepared for the fact that out here a wedding is an excuse to go completely mad! 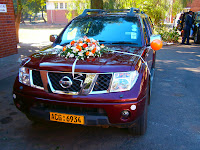 When he went to collect the bride there were about 6 cars in convoy, hooting their horns and lads hanging out of the windows waving and shouting. The other cars were also weaving in and out of each other and driving around in circles in the middle of the main high street where pedestrians cross the road at any point! Poor Dave was a quivering wreck by the time he got back, as he was sure someone would be killed...Not least of all him as his  gaurdian angel had jumped out of the car long ago!! 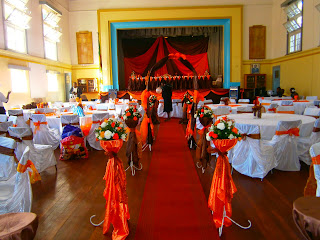 They really go over the top with weddings here as you can see by the decorations too. Each wedding has  a colour theme (this one was brown and orange) and not only were the 5 bridesmaid and 5 bridesmen! dressed in the colours but also the family members. There were 5 little people too all wearing white. The most interesting part was the catering as it was all done outside on open fires!(see below) I hope the Kings catering team are taking note!! Also the lady on the left is looking for a husband. Any volunteers!! 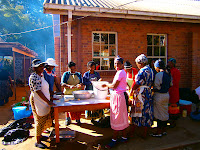