Happy Birthday to you!

No, Dave isn't celebrating his century, this is the fifth birthday of Thembalezizwe Church and a celebration of the first Sunday meeting in the new building that some of the guys from Eastbourne helped to build!

It was a fantastic morning of praise and thanks to God for his blessings and a time for envisioning the church for the future.
What a blessing it was to have room to raise our hands and dance with space to spare, even though there were about 300 people there for the celebrations. The Hamara church arrived in a lorry complete with benches and there were also a few people from New Creation church in the city who came to support as well.

﻿
﻿
It was also lovely for the children to be included in the meeting so that they could participate in the praise and worship rather than being squashed into a little room in the house. During the sermon they met under a tree nearby. The next building project is the 'caretaker's house' where Taurai and Tendi will eventually live. this will provide security for the site and enable the children to meet in two age groups, as at the moment there are kids of 3 with 11 year olds.﻿
﻿﻿
﻿
﻿
After the meeting we all had lunch together of bread, sausages and boiled eggs supplied by our great catering team over a wood fire.

The week before, when we were still in the old meeting place (Taurais house) Dave's chair broke in the middle of the sermon causing much hilarity, with me anyway! Actually everyone else was very respectful of the old boy, asking if he was ok but I assured them that he was only looking for attention, as you will all well know!!
This past Sunday Taurai preached a great sermon about evangelism and we prayed for people to receive boldness. As a follow up taps has asked Dave and I to go to all the life groups and help them to tell or write their own testimony to equip them. That will be very interesting as we have only been to a couple of groups so far. The Church has a great heart to be a blessing to their community as we have too.

Next Sunday we have another great celebration as Taps, Taurai and Mike are prayed into eldership.
The church is very excited and see this as a significant step forward. So watch out Bulawayo!!﻿﻿﻿﻿
Posted by Dave and June in Zim at 01:18 2 comments: 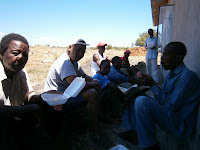 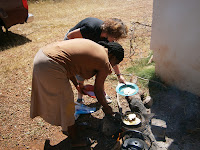 Seven weeks in.. Is it really that long? The last few weeks have just flown by! the men had a great time the other Saturday as they got together to start clearing around the new building ready for the Grand Opening this Sunday. I was enlisted to supply an English breakfast as an incentive to get volunteers which is fine if you have a cooker but as the Zesa was off Tendai instructed me in cooking over a wood fire! 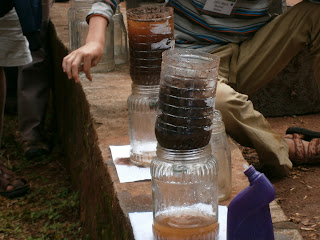 Two weeks ago we spent four days in Harare at the CHAMPS conference. We met some really lovely people and shared a cottage with a white couple from Zim who have spent the last few years training farmers in ' Foundations' principles. I now know how to farm ' on time', 'without waste' and ' with joy!' Dave attended the finance seminar which Taps was hosting and he found it very interesting and challenging. Here are some of the photos of the training showing how ploughed land washes away and how putting a carpet of mulch on the ground protects the soil and retains moisture. The team are doing a great job out here but even with the best farming methods, if there is no rain the crops are doomed and that is what we are seeing around Bulawayo, although it rained on all three days we were in Harare! 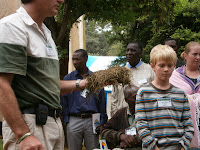 This week we have been involved in some business training with the Nehemiah Trust. They had selected nine people to train and at the end of the two weeks they will choose two or three to invest in and mentor. We may be involved in the mentoring and it has been a real eye opener as to how these lovely people who are often so resourceful and positive, live such a hand to mouth existance, so anything we can do to help will be a bonus!

Meanwhile, in my spare time, I have been designing and painting some signs for the hairdressers shop! (forgot to take a photo!!) The shop is called Beauty Island so it involved palm trees and sun! We have also made some fliers for them to give out to help build up their client base.

This afternoon I am off to Hamara farm for a ladies meeting. Sam and Marlene Poe are here at the moment so Marlene is speaking. Dave is helping Tairai transport chairs to the new venue at Bulawayo Drive (1 BD for short) for the meeting tomorrow morning at which Sam will preach. There is much exciement here and great anticipation that the church will explode once the building is open from tomorrow. (that's in numbers, not literally!) 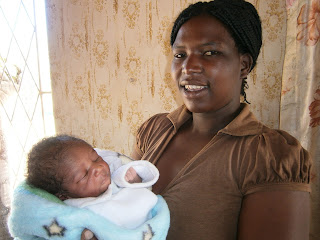 To close, here is a photo of Tendai and her new baby boy for those who know her and the family. She is the wife of the pastor of Thembalezizwe church.